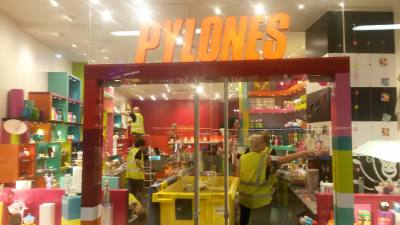 Pretty much finished with the Grand Central project now.  Launch was September 24 and we had something like 300,000 visitors in four days.  If you are taking train to or via Birmingham New Street, build time into your trip to check it out – it really is brilliant. Personal favourite is French giftware retailer Pylones, their shop http://www.pylones.com/en/boutique/United-Kingdom/193-Birmingham is so colourful as to be visible from space.  Photo shows the frantic race to get ready to open, night before launch.  (All shopping centre launches are like this, by the way.  It's like the ultimate essay panic scenario, except a lot more public if you get it wrong.)

My GC contribution was managing advertising and PR, plus quite a bit of last-minute on-site staff coordination with other stakeholders. There were nearly 200 people representing eight organisations in the area during the launch weekend and we had to make sure they knew what to say…