Enjoying 2020 so far? Here's what the experts of 2000 thought would be happening by now. (spoiler alert: it was much nicer!) 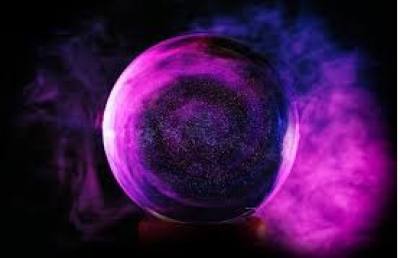 Lockdown Day 9: You know you’re getting desperate when you turn to the Brutal Office Clearout option to fill in the working hours. Even when all your clients or colleagues are either on furlough, ill, or crisis-managing coronavirus via Zoom. After a Stalinist purge of stray Post-it notes and dried up biros from the desk drawer, you decide to finally look in those dusty box files down the back of the cabinet….

That’s what I did yesterday afternoon, anyway. Happily, in the process of making several well -established spiders homeless, I also found 8pp of glorious A4 nostalgia – a ‘Crystal Ball 2020’ futurology paper I put together 20 years ago. Please don’t think I’m bigging myself up, by saying that. I apparently just swamped my brain with the published ‘Future Consumer’ content of Mintel, Euromonitor etc, summarised it and tentatively added a few tiny conclusions of my own.

Nonetheless, I poured myself a drink and decided to read this time-capsule text. And there are some interesting lessons to be gathered from what was, and wasn’t, correctly being predicted Back Then. See below for an account of our glorious year 2020, as seen in the days of Brad and Jen, Big Brother series 1 and Gran Turismo 2. And it actually turns out marketers might know a thing or two, after all.

Here’s an easy one to kick off, from good old Mintel. Prediction: Citizen 2020 will experience serious information overload. No shit?

Apparently, this would be as a result of that Internet thing most of us were basically barely using. OK, OK, we were using it – just not as much as we thought we were. We had No Idea. Amusingly, in 2000, we thought we were already experiencing information overload, but experts correctly expected this to get considerably greater, even if they didn't foresee TikTok. And a detrimental effect on peoples’ behaviour - specifically a lessening of ‘genuine’ social activity, because of time spent managing those avalanches of remote contact - was being predicted.  Were they correct? I’d say so.

Less obviously perhaps, was the suggestion that age and class demographics would, by now, be far less predictable indicators of taste and behaviour. “Suppose”, (people said,) “in days gone by, 3 male C2 40-year-olds from Leeds had met for the first time”. Those guys would probably have been able to talk comfortably about their shared world for hours on end, if they’d wanted to. Even by the turn-of-the-century, that same conversation would have found less common ground to explore. And by 2020, we predicted, their interests would certainly be too diversified, with obvious implications for media buying and other marketing interventions.

I certainly bought into this argument and again, to some extent, it’s happened. But life in 2000, a bit of flooding aside, was pretty lacking in drama. These days we have a steady stream of massive, external factors providing material for hypothetical ‘Leeds conversations’. Brexit, global warming, annual extreme weather events, and of course now the Obvious Topic.

So, whilst the trend was correctly spotted, super- individualisation may not be here just yet.

Next, and something I would have previously claimed the futurologists truly ‘hit out of the park’, we come to predictions on patterns of work. “Pressure on all of us to work will not decline,” was the verdict, and they even worked out how this would look. Jobs in 2020 would be split between two types: firstly, low skill/no skill, temporary employment, probably at minimum wage level and with little security; and, secondly, comfortable well-paid managerial/professional roles.

Such predictions were in contrast to quite a number of behavioural science academics, perhaps fans of UBI, who foresaw a lotus-eating 2020 with robots doing all the jobs and the British population sitting about whittling Welsh love spoons for barter at rural markets populated by clones of the members of Men Without Hats. Or something.

The picture of work being painted by the market intelligence people was, of course, the one that eventually happened. Go figure. At least it did happen, until spring 2020 when half the workforce got told to go home and be unemployed.

Only time will tell if we simply reboot the inequality of employment we had in 2019, once we get out from under coronavirus. It might instead be nice if previously undervalued professions like ‘supermarket cashier’ and ‘hospital toilet cleaner’ carry a bit more kudos, now that people doing those jobs have been literally risking their lives for the rest of us. (The UK does have the highest minimum wage in the developed world, but even so…)

One last accurate prediction, albeit offered without any real suggested solution, was the increase in older people living alone, as a result of both later marriage and increasing relationship failures, both on top of longevity. Nobody quite seems to have predicted that such lone, older-person households would be under quite the pressure some of them now are, and not only as a consequence of social distancing. But an urgent requirement for new housing provision for such lone households, (provided nowadays, for example, by my lovely client Orbit Group in Coventry), was definitely on the horizon 20 years back.

So far so good. Now for some of the things that Everyone was supposed to be doing by now, but that we really just….. aren’t.

On the cusp of mass market status, back in 2000, was STT – speech to text software. This was the stuff of science-fiction – in fact better, as most science-fiction still showed people typing by hand. The losers!

Obviously, voice recognition per se is indeed something a lot of people use nowadays – “hey Cortana” - but still only a minority of us really rely on it, as opposed to using it to switch our lights on. In contrast, the prediction for STT in my essay was that, by now, almost nobody at work would ever type or write anything by hand. Someone had even suggested manual writing/typing would become an activity only for those who struggled to enunciate clearly. I must tell my daughter that, as she sits vigorously hand-typing 50 words a minute into Facebook while somehow simultaneously watching/listening to Drag Race.

Maybe the problem is that most writing on the subject of technology is carried out by people who are hugely enthused by it and want it to disrupt their lives. But as George Michael once wrote, “most of us are not sure”.

I actually suggest that the technology gurus who are talking to opinion formers, at any given moment, are normally exaggerating onset of uptake by 10 years or more. Don’t agree? Well, I’m still taking bets on the whole “driverless Uber car arriving at my door in Leicestershire” prediction – i.e., that it’s not going to happen until I’m so old I won’t want to go out anymore anyway.

In the case of my crystal ball gazing in 2000, the direct equivalent of driverless cars was this proclamation:

“(In 20 years,) computers will be embedded in all surfaces and items in the household, controlled by voice as well as gestures and facial expressions. Many household tasks will be automated.”

Again, this could have come true; some people were desperate for it to happen, but most weren’t bothered. It’s four years since John Lewis launched Smart Home, featuring all the funky IoT gadgets running off the Internet that you could use to impress your goatee-wearing cutting-edge mates. They rapidly expanded this to 5 branches, so there is clearly a market for fridges that photograph their contents for you when you shut the door. But they’re hardly universal are they?

Most of us are still pushing the vacuum cleaner around the lounge in 2020.  We can easily ensure we never watch a TV commercial ever again, but we somehow still watch plenty of them. And even though our next neighbour doesn’t like Katy Perry, orienteering or home cooking Indonesian food, we haven’t stopped bothering to talk to them on that basis.

I think there’s a lesson here for Coronavirus Britain. Especially people predicting that “we will return to a totally different society and Nothing Will Be The Same Again”. People are slower to change than you think. Generally, whenever there are perfectly good, logical reasons why things are going to be truly, drastically different in 10 years, they somehow …..aren’t.

And I’ll drink to that.