Iron Maiden and the Art of Project Management 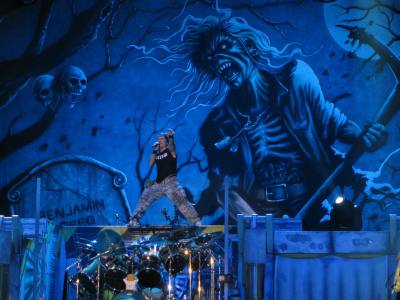 Sometimes, no matter how long you’ve known something, you need to be reminded of it again.

And, because most of us are ‘butterflies’ to some extent or other, it somehow really helps if it gets repackaged a little. So I’d like to thank Bruce Dickinson for pulling me out of a hole this morning.

When the clocks go forward each year, in the UK, we lose an hour from Sunday. Not great for me, as I’d set Sunday aside to start making serious inroads into what looks suddenly like a very scary work list. It’s been a reasonable January and February overall, but as of 0830 (should have been 0730, dammit, pesky Summer Time) I found myself in an uncharacteristic flap looking at a bucket load of brain work:

- Two hobby projects to write up for short deadlines - (why, as a consultant, do I choose hobbies that also involve using a laptop?)

- One client training project, requiring me to write a presentation lasting one hour. Trouble is, the subject matter could easily fill up 10

- My new business-growth presentation, about which I’m very excited, and for which I keep finding new material...

- Three ongoing client projects including a clothing branding one which is really cool and will not get out of my head, and another which has a lot of stakeholders I need to juggle

What did I do? Well, for nearly an hour I did what we all know you shouldn’t do. I picked one job and attempted to knock the ass out of it at top speed to “get ahead of the game”.

Fortunately, I then remembered something. Spending New Year’s Eve, ill in bed, reading the autobiography of the quite remarkable Mr Dickinson. Bruce is the lead singer for Iron Maiden, and has additionally become an Olympic class fencer and trained as an airline, light aircraft and stunt pilot, culminating in him doing 10 years moonlighting as a commercial pilot in between world concert tours.

He gets stuff done.

Back in the day Bruce gave some advice to the late Robert Palmer. Robert had a worldwide hit in about 1986 with that album we all bought that had ‘Addicted to Love’ on it. Naturally the record company was anxious for a follow-up, causing Palmer to do his best impersonation of a rabbit in the headlights, and describe his task to Bruce as ‘climbing a mountain’. “I can’t do it,” was the upshot.

“Use the steps,” was Mr Dickinson’s advice. “The steps in the mountain. It’s what they’re for”.

That’s the key. Every mountain has steps built into it – you just need to recognise them and put your foot on one at a time. We all forget to do this from time to time.

This morning I put down my pencil and keyboard, and started looking for steps in my particular mountain. 20 minutes later I had a rather nice double flipchart on the office wall, depicting squared off steps going up the page, with ring fenced little packets of work written next to each one. It didn’t seem to matter if sequential packets related to different projects - I’ve always been good at switching my head from one thing to another - and after another hour I had already scrambled up a couple of those mountain steps.

Thanks Bruce. And see you at the NEC in August.