Outdoor advertising - still making people fall over in the street 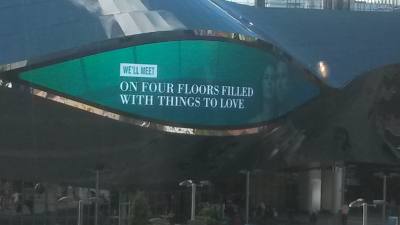 Occasionally you hear people say traditional advertising is dead.   This is nonsense.  Usually the people concerned have hipster beards and want to sell you the services of their digital agency. Resist. Or at least, buy shares in their agency before you give them your business. Advertising, old school, still has considerable impact and especially where OOH (out of home) is concerned - it's one of the only ways to reach the Everyman audience many of you still want.

This is the John Lewis variant ad, part of the RBH launch campaign for last week’s Grand Central launch. Here you see it on a 100 foot wide screen, one of the incredibly bright and vibrant Birmingham Eyes which form part of the exterior architecture.

Now, there's no denying the role of social media in modern marketing. But I saw pedestrians in the city centre doing double takes, stopping in their tracks on pedestrian crossings and even bumping into each other when they first caught sight of these bad boys.  So you can't help thinking there’s still a lot to be said for looking very, very big if you can find the money.

What Wikipedia says about poster ads