The Midlands in February – where else would you want to be? 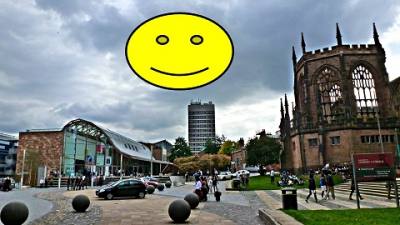 In a world currently filled with emotional hysteria and negativity, I’m ignoring the cold and the Guardian this month and channelling my inner Optimist. What better place to start than my home region of the Midlands?

Serial pessimists feeling glum about the stock market downturn earlier this month have hopefully noted a lot of it has been clawed back since. Certainly, the furore of early February overshadowed January’s lot of underlying good news for the UK and especially Midlands business. On the 30th I watched Prof Paul Forrest from the Midlands Economic Forum combine with two other presenters at Birmingham City University to deliver a snapshot picture of… a basically healthy British economy. And one in which the Midlands regions are comparatively strong right now.

So, real GDP grew by 0.5% in Q4 2017, the strongest quarter of the year. I’m sure you knew that. Within this, manufacturing, outperforming the rest of the UK economy, has recorded its longest run of expansion in two decades. Service & production were also up.

Gloom fans will note construction was the ‘odd person out’, finishing 2017 in decline. And whilst that admittedly was off the top of a record high output level earlier in the year, any possible short-term ‘Carillion factor’ is not included in any of the stuff we saw.

Nonetheless the Midlands will take some knocking off course – partly due to the fact we actually make things in the Midlands, both our regions showed similar PMI data trends in 2017, comfortably outperforming the UK composite PMI most of the time.

In recent years, IHS Markit’s PMI has beaten any other predictive measure of likely economic performance, in terms of accuracy. So, if it says Midlands purchasing managers think their companies will do well in the next year, it’s highly likely they will.  In comparison, the Treasury UK performance forecasts that get all the publicity look more like  a man on a stage bringing forth a rabbit from a formal item of headgear.

We tend to worship at the altar of service industries in this country, with finance a particular sacred cow. However, GVA per worker in the West Midlands manufacturing industry varies between £80,000 in cars and £100,000 for aerospace. The equivalent GVA for City workers in London has recently been shown to be consistently overstated. As a result there  is not a fat lot of difference in productivity terms between our manufacturing and the financial service industry (which incidentally directly contributes just 2% of UK GDP, prompting the question by Prof Forrest as to why we spent £1.5 trillion bailing it out. J)

All good stuff and sent me home with a warm glow that subsequent events have not dispelled. What I like most about these sorts of business seminars is the sense of a shared, nonpolitical agenda and the courteous, reasonable tone everyone takes. OK, Katrina Yu from the ONS did come under a bit of very polite questioning regarding the tendency for civil service bodies to consistently underrate British potential. Not sure the ONS itself does this but …. 1.8% growth in 2017 was over double Mark Carney’s Bank of England forecast, (0 .8%) and nearly a third higher than the OBR prediction, (1.4%). So next time our BBC newscaster tells us things are looking bad in the long term we might want to water that down a bit.