It's Not What You Say, It's When You Say It? 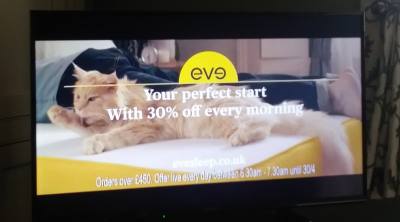 Don’t know about you but it’s rare that something happens to make my day as early as 0630.

(No sniggering at the back please).

However, on Wednesday morning I saw a TV ad for eve mattresses (sic) which made me happy, made me think and also solved a problem for me.

Unsurprisingly, as a brand/marketing consultant, I’m a fan of anything genuinely clever as long as it looks as if it’s connected to selling something. And I was in the market for new examples. On my ‘S-Word’ strategy course last month, my audience were treated to stories citing Innocent, Avis, Samsonite and Coca-Cola as best practice examples in various levels of corporate, brand and communications strategy.

One of my attendees said they’d enjoyed the course but politely suggested that, ‘Fearless Girl’ aside, some more recent examples might be a good addition. This made me feel a bit old – after all I remember Innocent sending one of their free-sample Cow Vans to my workplace, not long after they had launched. But it was still a good point.

Anyway, at break of day, eve hove into view on Sky Sports with an ad which was positively sunny in its overall colour scheme, brightness and warmth, extolled the comfort of its mattresses - and offered this:  Get on our website between 0630 and 0730 and get 30% off.

On its own, this was enough to make me put down my spoon and applaud.

Clever eve clearly believe that the absolute best time to contact people who are unhappy with their mattresses is when they have just hauled their body off it in a grumpy state and are kicking off their day.

Yes, you could target people far more tightly using digital, building customer profiles of folk searching terms like “sleepless night” and “insomnia”. At any time of day. But I suggest what eve understand is that a poor night’s sleep is at its most negatively-motivating when it’s just finished – that’s when people may throw aside toast and chopped banana to try and do something about it.

This is a job for broadcast media. People, with hair unkempt and teeth unbrushed, pausing to watch a titchy little ad on their phone at this point in the morning must be strange indeed. But a nice big bright TV picture over one’s Cheerios is a different matter. I almost bought a mattress, until I remembered the current one only dates back to Christmas...

Now, before you scold me for confusing a good tactical idea with a genuine piece of brand building (as if) I have to say I went and checked out the eve website and it’s full of nice thoughtful work.

Lots of PR friendly content (“we are urging the nation to ditch the snooze button” - no doubt they’ve run press releases breathlessly revealing how many people don’t wake refreshed, hit snooze and end up late for work). Social media ideas like ‘joining the #sleeprich’. Product-wise, also, a design commitment to a strong yellow signature colour which the brand can own and which disrupts the normal conventions of the market.

They describe the mattress sector as “a forgotten industry” in which they want to innovate. Arguably, innovation is the world’s most overused word and it isn’t needed anyway – really ‘all’ that’s happening here is a manufacturer having a consistent plan, being clever in all that they do and standing out as a result.

PS. As usual, with any product in the modern era, looking solely at online presence for this brand would reveal a mixed picture. This is another example of why you can’t rely on a titchy bit of social media and customer conversations to build your brand. Those pesky customers may not say what you want them to. Or they may be chatbots in Romania being hired by your competitors. So, it’s back to being clever with your marketing I guess.

PPS.  Let me know if you need any help with that!

eve mattresses - one to watch