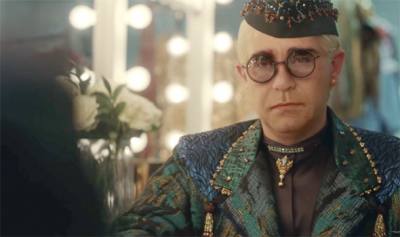 2018: Weird year, weird Xmas ads. But which is best?  The Birmingham Mail has obligingly lined them all up for us here if you want to look, though I think the winner is indisputable.

Let’s get the other suspects out of the way, first. Iceland – it’s a lovely film, it’s a great cause but it’s not really even their material (Greenpeace did it and Iceland effectively sponsored it) and basically risks coming off as virtue signalling. Third prize nonetheless. Sainsbury’s – beautifully shot, wonderfully developed but they must be gutted that after they signed the script off in June, or something, arch competitor JLP/Waitrose did a ‘somewhat similar’ idea in September. Nobody’s fault of course. Who’d be a client when this sort of thing happens?

Elsewhere, TKMaxx has a large sock vomiting gifts onto people. You can see how difficult the “same brief every year” task gets when this happens. Note to marketers: it isn't just Christmas when agencies receive the same brief with the same proposition and yet have to try and think of a new way of doing it. A lot of your own communications may well be in the same bracket and the solution is to find a new strategic approach. Anyway, I quite like the sickie sock, but no prizes.

Elsewhere, am I dreaming or are Morrisons running the same ad as 2017? That could be a thing marketers could do. Just don’t get involved in the whole annual merry-go-round and stick to consistent messaging.

Again, this point applies more broadly. I once had a client for whom our agency won a major award for the effectiveness of its direct marketing, largely because the ROI was so good. Six months later and some of the client personnel briefed us that they ‘fancied a change’.  The mailings were still working. If you think you could run the same campaign a second time, and you aren't obliged by some court of public opinion, why on earth would you pay to have a new one produced?

Back to Christmas then.

No surprises, John Lewis is my #1.

So many good things to say about this. Communications can be clever and effective without necessarily being direct. For example, by using Elton John rather than someone new and potentially a lot cheaper, JLP remind us that they, too have been a fixture in our lives, something that's surely part of their brand appeal.

This time, their Christmas advert also subtly says “we sell lovely things which others may not ” and “it’s really about value and not low price”.

More than any recent ad they’ve run it ALSO says “come to our shop and buy something”, which is hardly surprising after the year they’ve had. A lot to put across, then, but… Just look how it achieves all these things. Brilliant, again.