Don't mistake your logo for your brand 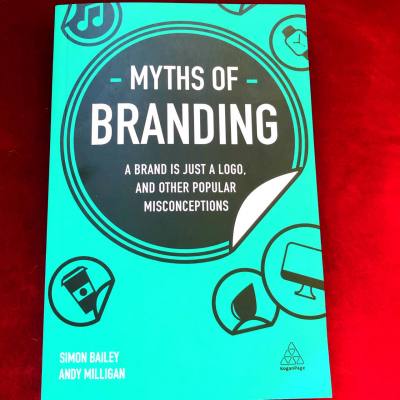 We had a really nice builder working on my house recently who copiously punctuated our every conversation, regarding the work they were doing, with the word ‘obviously’. Which is fine except it was usually in connection with something I had no idea whatsoever about. "Obviously, we've got to bring the water pipe under the flashings up there…" would have been one example.

I guess we all have a fund of basic knowledge, about the jobs we do, which others don't automatically share.

Nonetheless, I'm still mildly surprised at how many business people I meet who think a brand is a collection of graphics and fonts, usually with a large manual telling people how not to 'get it wrong' when they are presenting said brand, on a webpage, or an exhibition stand, whatever. This new book, by my occasional Caffeine colleagues Andy and Simon, attempts to set the record straight.

It is indeed a perennial issue. The same business people mentioned above would, if we asked them, confidently tell us a lot of stuff about Coca-Cola, or Samsung, or Fed-Ex. Facts, impressions, opinions they had developed. Amongst these would undoubtedly be critical brand messages or values; things on which the companies concerned had lavished attention and spent budgets.

Did all this information, sometimes referred to as 'brand salience', come from looking at the red and white Coca-Cola logo? No intelligent managing director, finance director, whatever, would ever suggest that. Yet colleagues I speak to still deal with clients who excitedly sign off on 'brand values' and 'key messages'..... and then apparently forget all about them. In reality, these are the things that will, over time, cause the graphic logo and colours to actually mean something to people.

Not getting your organisation, particularly its marketing people, lined up behind true brand content is a serious mistake. It's a bit like making a lovely job painting the front door of a new house you've bought and forgetting to furnish the interior.

Many companies make this error nonetheless. Their online marketing is divided between random comments about things they are doing today, and aggressive ROI-driven tactics designed to poach customers on the verge of making a purchase. Their literature and website reads like a presentation by the sales director, only with library photographs and (admittedly) very consistent graphic branding.

Somewhere between these two areas of activity lies the entire territory in which genuinely distinctive brands do their building work. Interesting, emotive claims that are relevant to customers. And repeated. And amplified through different media and over time.

It's not rocket science though. If you’d like to discuss making your brand mean something to your customers that goes beyond Pantone Taupe 492, it really doesn't have to be some convoluted six-month process and there really doesn't have to be a big manual at the end of it. There are less graphically-motivated people who can help you sort it out. Indeed, at least three of them are in this article…