Design agencies, look away now. Clients, sure this wouldn’t happen on your watch? 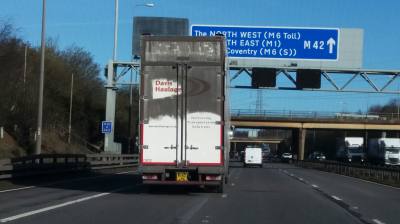 Photographed this on a sunny winter day back in January, on a Midlands motorway here in the UK, (I wasn’t driving by the way) and was still laughing bitterly when we got to the next junction!

Quite probably you get the point already but kindly allow me to explain by means of an anecdote.

I was working for the Design Council at a fair for small/medium businesses  couple of years back, when a young man of 17 who had started quite a successful small Internet business asked me if I thought a quotation he been given, for designing a logo for his brand, was excessive.

Upon enquiry, it seemed the amount being asked was £30.

It was hard to know what to say. We were at a booth, at York racecourse, surrounded by possible prospects for my SME support services. Many if not all of the passers-by undoubtedly represented a better use of my time than this, clever and polite schoolboy. Still I had to fight hard against an urge to list all the many reasons why £30 was just not going to purchase a credible brand development job, even for a digital business run out of a bedroom.

In the end my will was strong and I simply said “well, you’re unlikely to undercut that...”  I think I may then have gone to the washroom to have a bit of a cry.

It gives me no pleasure to say this, but the craft of C.I. design itself, specifically the use of graphics and the careful choice of corporate colours, is not a business your child should be considering going into.

Take the truck picture, above. Hopefully Davis Haulage spent at least some time deciding how their offer to the world was going to be presented at its simplest level. Perhaps they involved a branding agency. Maybe a marketing consultant. At the very least, in my judgement, they got a graphic designer in and whoever it was did their level best.

Clearly not, and it’s why graphic designers behind their Apple Macs all around the world risk earning progressively less and less. It’s not like people in the organisation think ‘the Davis name is unimportant’. After all someone bothered to wash off exactly as much of the back of the truck as appeared necessary. But the design thought and work that went into that bold double crescent graphic, and the meetings held to debate exactly which pantones were going to put over the company identity best – well, that stuff never really made it outside of the marketing office.

Brands are a way to encapsulate our customer promise in a consistent way, and as such they should be seen as a vital part of the way our organisation does business. To my mind, the truly vital part of brand development is agreeing and establishing with our stakeholders the values, purpose and key messaging we need, in a consistent way that all audiences will relate to. However, once we’ve done this, we need something to act as a shorthand, which is where the CI comes in. It’s difficult to think of an employee of Coca-Cola, or Hewlett-Packard, who doesn’t think that the CI is in some way a big deal. That attitude, by the way, is not because those companies are big companies and big companies ‘can afford to’ take marketing seriously. They are big companies at least partly because they have always taken marketing seriously.

Maybe Davis are about to set 2017 alight in the haulage business, I certainly hope so. Also, we may speculate as to whether the kid I met in York is now employing 25 people despite having a random squiggle knocked up in someone’s bedroom as his logo.  These things can certainly happen, precisely because CI is not mission-critical to the success of almost any business. It just, sometimes, helps a whole lot. If you let it.

See here for some views on the benefits of design in general.